This site section presents a brief overview about damping and the relevance of its properties to science and materials engineering. The different methods of characterization are also discussed.

The purpose of this content is to provide for the Engineer or Researcher the basic information about damping in order to facilitate the characterization and use of knowledge of its essential property for all class of materials. 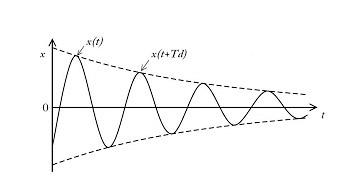 Decay from amplitude vibration of a damped harmonic oscillator after interruption of the excitation.

Besides the classical application in the study of metals and building materials (because of the importance of damping to the structural integrity in case of earthquakes), the characterization of damping has also been used in the study of concrete for the evaluation of damage. For example, in the case of damage by thermal shock, the mechanical stress induced by temperature gradient causes the nucleation and propagation of micro-cracks and cracks which degrade the mechanical properties of the material, thereby, affecting its useful life. The nucleation and evolution of these micro-cracks and cracks can be monitored with the damping characterization, which increases due to friction between the walls of these cracks.

The damping of a system can be classified in three main ways: internal damping, structural damping and fluid damping. The internal damping is associated with defects in the microstructure, granularity and impurities of material and the thermoelastic effects caused by local gradients of temperature. The structural damping is associated with energy loss due to friction in joints, screws and semi-rigid joints. Finally, the fluid damping arises from the drag resistance in a fluid, for example, the conversion of kinetic energy of a pendulum to thermal energy into the air.

There are several methods for determining the damping, which can be obtained basically in two ways: via the time-response of system to a transient excitation (for example, the logarithmic decrement method used by the Sonelastic® Solutions) and using a frequency-response function of the system (for example, the half-bandwidth method). The logarithmic decrement method calculates the damping from the attenuation of the acoustic response of the material or structure after an impulse excitation. Both methods consider a model for the calculations, usually the model of viscoelastic damping. The choice of the method depends primarily on the range of damping and frequency of vibration.

This white paper presents the theory and proposal of a methodology for the non-destructive elastic moduli characterization of composites using the Impulse Excitation Technique.